Wondering what kind of food you’ll end up finding in Seoul? Well wonder no more! Seoul has a great variety of food for even the pickiest eater. Here is a list of some of the best things to eat in Seoul.

Have you ever heard of Jeju Island in South Korea? They call it South Korea’s Hawaii because of it’s stunning blue waters, laid back vibes, and great food. One thing Jeju is famous for is a special breed of domestic black pigs. If you’ve ever had Korean BBQ outside of Korea, then you’ve had pork belly. But the pork belly that comes from the “Jeju Black Pig” is in a different league of it’s own! It’s basically the Korean Wagyu version of pork. That of course, makes it more expensive than your average cut of pork belly. But is it worth it though?

I can say with absolute certainty that it is! Wow. If I could just transport myself back to South Korea I would happily eat this as my first meal. The pork belly from Jeju’s black pigs boast a nutty, rich, steak like flavor that I’ve never experienced before. You don’t even need to eat anything else with it. Enjoy it by itself, because this is one Korean BBQ item I haven’t seen outside of Korea yet.

Beyond Korean BBQ, you’ll find that Korea has some great soups and stews. In fact, they have so many that it’s hard to name them all! Kimchi Jjigae is a staple that you can try at a lot of different restaurants. It comes out warm and bubbling in a stone pot like the one pictured below. Kimchi Jjigae is warm with a spicy and sour taste to it. It’s typically made with kimchi, tofu, various vegetables, and sometimes variations of fatty pork or beef can be added. It’s perfect when you want something spicy and warm in your stomach!

Another soup you could go for is Korean Oxtail soup. It’s a comforting and filling dish. Just like the Kimchi stew, the Ox-bone soup comes out bubbling hot in your own stone pot. The broth of this soup can have a rich flavor that comes from boiling the ox bones  and different cuts of beef for hours and hours. It’s typically milky in color, but this can vary by restaurant.

Banchan are the small side dishes that come free with each meal you eat at a restaurant in Korea. Free! There are at least a few different side dishes, and each restaurant will serve their own variations. You will always see kimchi though! So not only are these side dishes free, they come with the added benefit of being healthy for you. Besides typical kimchi, I was also able to try out radish kimchi, fish cake, marinated small crabs, acorn jelly, kimchi chives, and much more!

Another common food you’ll find around Seoul is Jeon. Jeon is a savory type of Korean pancake made from an egg and flour combination that can include anything from vegetables to meats and seafood. There’s Kimchi Jeon, Haemul Jeon (seafood), Pa Jeon (chives), and more. It has a light crispiness on the outside and the flavor absorbs and bursts with any of the ingredients it’s been made of. 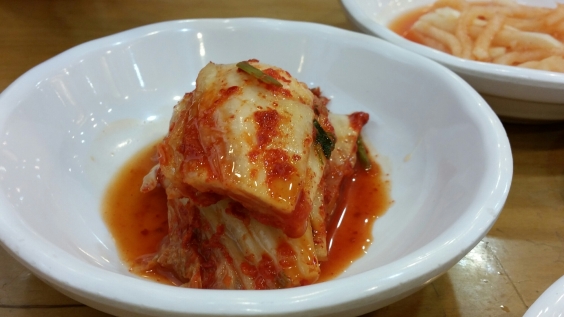 Bibimbap is also another dish you’ll find all over Seoul. This can be customized to fit any vegetarian in your group. It’s actually one of my first Korean dishes I had ever tried. It’s still one of my favorite Korean dishes too!

If you somehow stumble upon Bulgogi Hot Pot while you’re in Seoul; don’t hesitate and order it! It was the single best dish I had, and to this day still stands out as the best dish I have ever eaten while in Seoul, South Korea. Unfortunately I can’t even recommend this particular place I went to. I just happened to be hungry and we stumbled into this unknown restaurant in Insadong. Hopefully pointing out the are will at least help you narrow it down. Bulgogi hot pot is also a dish I haven’t seen in a lot of Korean restaurants I’ve frequented. If you find one, please let me know!

Last, but definitely not least, is Kimchi. It’s the traditional dish of Korea. It’s so prevalent. It’s included in a lot of soups and dishes like Jeon. If you don’t find it in your dish, you’ll be sure to find it as a free side dish (banchan). Kimchi is a spicy and sour cabbage that been fermented, It’s quite healthy and a great addition when you need to balance out the greasiness of foods you’re eating. Go ahead and try it out at least once. You may or may not like it, but it’s worth a taste.

I Love Seoul Series: Best Things to Eat in Seoul | 2

Sun, Sand and Sea .....Tales of a British expat living in the UAE