Looking for something comforting and that reminds you of home? Well Seoul, South Korea has that covered for you. From Thai curries to Italian pastas and more, here are some of the best things to eat in Seoul!

You can find some great traditional restaurants in Seoul, but there’s also some wonderful international foods. Some of the international foods you will run into will be as true to that country as possible, but some are created with a Korean fusion that’s very unique. I’ve listed some of the types of food and restaurants you should try while you’re in Seoul. It’s interesting to be able to experience pizza, tacos, and burritos in such a different way!

Before I traveled to Seoul, some of the things on my “must-eat list” spanned the range from pizza to Mexican Korean fusion food. Through K-drama’s, television shows, and

One day after a DMZ tour we walked around the area known as Insadong. We ended up in a Pizza Hut restaurant of all places! I know that Pizza Hut restaurants used to be a thing back in the day in the U.S. Before pizza became the delivery icon it is now, families went to restaurants and enjoyed each other’s company while sharing a slice of pizza. So, at this Pizza Hut restaurant there were all sorts of crazy combinations and a wide range of toppings. We saw one pizza combo that included bulgogi meat, shrimp, corn, assorted veggies, cheese, and a cream drizzle topping. You’re probably thinking the same thing I was. How can you enjoy, or even taste, half of the toppings on that pizza! The one we ended up ordering was recommended by our waitress. It was a lot tamer when it came to the number of toppings, but it still tasted great. Very simple and unique to South Korea. The pizza was appropriately names the “golden pizza”. It had a pepperoni topping, a crust filled with gooey savory cheese, and then around that was a ring of sweet potato filling. Yummy! Dinner and dessert in one go. 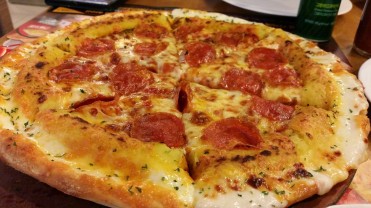 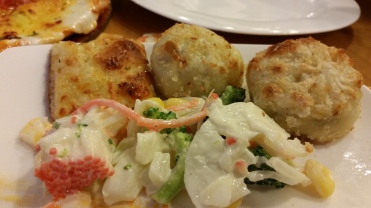 I would recommend pizza as one of the top international dishes to try in Seoul, South Korea. They pizza style here is just so unique and different, that you won’t be able to see it anywhere else. If you’re craving a good old pasta dish, there’s plenty of great Italian restaurants like Ciuri Ciuri and Cuccio Osteria.

Now being a girl from Southern California, with access to some of the best Mexican food outside of Mexico, I was curious to see if there were even any Mexican restaurants in South Korea. It turns out they do! But how good could it be, right? So, when I was on the search for a good Mexican restaurant, every blog I read kept mentioning Vato’s Urban Tacos. It’s highly rated and the photos of the food on Google reviews were enticing enough for me! So, one afternoon we headed to Vatos Urban Tacos located in the area of Itaewon. Since Vatos is very well known, the wait can sometimes be up to 2 hours during peak times. Luckily for me and my stomach it was an early lunch on a weekday. So, we ended up getting seated right away and ordering their most popular dishes. First up were the kimchi carnitas fries, then the galbi tacos, and a final order of their shrimp quesadilla. Oh man, this place did not disappoint! The kimchi carnitas fries were the best. It was delicious combination of spicy and kimchi and juicy carnitas meat. I’d say that the galbi tacos are standard, and are a great option for someone looking for a traditional type of taco. The shrimp quesadilla was unique! It had a slight sweet taste to it, and there was even corn in it! Not the typical quesadilla, but then again this is a fusion restaurant.

Being on vacation and all, of course we had to order and test out a couple of drinks as well. I had a mango tequila with a bottle Tecate placed on top of the drink! This wasn’t my first drink like this though.  I can only assume the owner must have seen it in a California restaurant and brought it over to Korea or he’s from California himself. It’s quite common to see this in Mexican restaurants and bars all over Southern California. The only difference I noticed was that they used a full Tecate bottle. The previous versions I drank only included the small Corona-rita beer bottles. The other drink we ordered was a deadly mixture of Makgeolli rice wine and tequila. Deadly but delicious. So, if you’re ever in Itaewon, I highly recommend stopping by this place. The atmosphere is lively, the food is great, and drinks are fun! 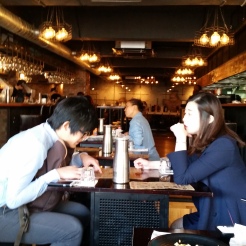 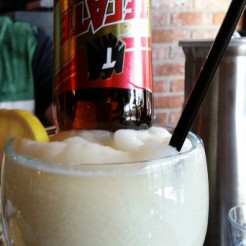 I Love Seoul Series: Best Things to Eat in Seoul | 1

3 thoughts on “I Love Seoul Series: Best Things to Eat in Seoul | 2”