I cannot boast enough about how good the food was in Seoul. Every meal I had there was a memorable one; good or bad. At the end of my trip the good definitely outweighed the bad! So here is the final list of the best things to eat in Seoul.

My time in South Korea has come to an end, and it’s time to wrap up some of the best things to eat in Seoul. In this post I want to highlight some of those meals I enjoyed during the last few days in Seoul, South Korea.

On the top of my “must-eat list” was Samgyeopsol, also known as pork belly. If you’ve had Korean barbeque before, you’ll know that pork belly is a staple. I was eager to try out Korean barbeque and pork belly in South Korea. People say that food is always the best in its home country! So far, I have found that statement to be true. Now this is different than the Black Pig pork belly I had earlier in my trip. That one is more of a specialty you won’t find outside of Korea.

So, on our last night in Seoul we took a taxi to the Gangnam area. As we were exploring we happened to walk by a small restaurant right next to the famous Coex mall. My nose immediately perked up to the delicious scent wafting from this tiny restaurant. I couldn’t resist. We ended up going in, getting a table, and ordering pork belly for dinner. I definitely had no regrets! In fact, I’m a little upset that I’m now so jaded when it comes to pork belly dishes. 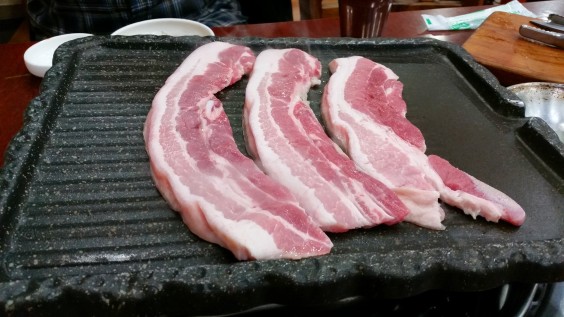 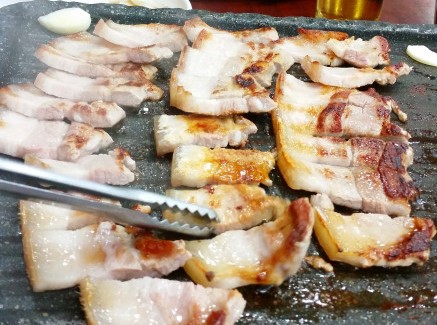 The one difference that really stood out to me was how thick and juicy the pork belly in Korea was versus pork belly served in the U.S. There’s no doubt they’re doing it better in Seoul. The pork belly was thick, juicy, flavorful, and contained the right ratio of meat to fat. Most of the pork belly I’ve had in California is so thin. And let’s be honest with ourselves, at that point it just needs to be called bacon.

As you may already know, it’s typical to be served a variety of small free side dishes with your meal. With this meal I was able to try out a ssam. Ssam can be translated into “wrapped”. It refers to leafy vegetables that you can use to wrap a piece of meat and fillings in. The ssam here included Kaenip, otherwise known as sesame leaves or perilla leaves. This was my first time having a sesame leaf and it was extraordinary! The leaf itself tastes bright and herbal with a hint of mint. Okay guys, I hate mint in food. But for some reason, this just worked because the sesame leaves help balance out the grease and fat from the pork belly.

Besides the sesame leaves, there was an interesting side dish I haven’t had the chance to try before. Acorn Jelly, also known as Dotori-muk, is a jelly made of acorn starch. I’ve never seen it as a side dish in the U.S., but I did learn afterwards that it’s a prevalent dish in South Korea. Acorn jelly is mild in flavor and soft in texture. When I had eaten it plain there wasn’t much flavor to it at all. But there are some additional sauces to help flavor the acorn jelly. It may not have been the most memorable dish I had, but it is something I’ve only been able to try in South Korea.

One other type of food that was memorable for me was Korean beef, also referred to as Hanwoo.  Hanwoo is a breed of cattle native to Korea. Hanwoo beef is to Korea as Wagyu beef is to Japan. This beef is supposed to taste exponentially better than your average kind, it’s only found within that country, and it’s also much more expensive.  Before coming to South Korea, I learned that beef is typically more expensive due to the shortage of land to raise cattle. But knowing this still didn’t prepare me for the intense sticker shock!

One night I bit the bullet decided to splurge anyways. Sometimes being hungry and cranky results in me making irrational choices that could probably have been avoided if I had a Snickers bar in my purse. We walking around Myeongdong late at night, and was enticed into a restaurant by one of their employees outside trying to get customers to come in. We ordered the assorted cuts Korean BBQ beef set. The total price? It came to $100 USD for two people! Keep in mind that these are small cuts of beef. This isn’t a steak sized portion you would be accustomed to in the western part of the world. Although it was very mouthwatering, for the amount we ate it definitely wasn’t worth it. But hey, I take 85% accountability for my decision. The other 15% I blame on my stomach. I’m still glad for the experience, but the next time I’m in Seoul I’ll be sure to do my research on the best places to eat Hanwoo. I think this time around I was just suckered into the closest restaurant because of my hunger.

Unfortunately, this will be my last food related post about my time in Seoul, South Korea.  I’m sad to see it come to an end, because I loved reminiscing about all the great food I had! On the day of our departure I decided that I just couldn’t leave without one last Korean meal. I know they feed you on the plane, but come on, airplane can be more of a miss than a hit.

At Incheon international airport, I was surprised at the great food choices they had to offer.  Did I mention how much I love Korean food? I feel as if I’ve drilled this over and over in all of my blog posts about South Korea! The side dishes in Korean food, otherwise known as banchan, are great for someone like me who needs variety in their meal yet doesn’t eat much. The endless amount of dishes and flavors are really what I enjoy a lot about Korean food. But I digress, so let’s get back to the story of my last meal at the airport! There were just a few hours left before our plane started boarding, and right by our gate there was a nice place to sit and choose from about 20 or more Korean dishes.  Our final choices? For me it was easy. I chose bibimbap. We also ordered a spicy stir-fried squid, which I believe it called Ojinguh Bokum. The bibimbap was filling and hearty. The spicy stir fried squid was indulgent and flavorful. All in all, a great last meal in South Korea. 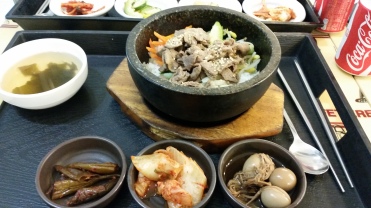 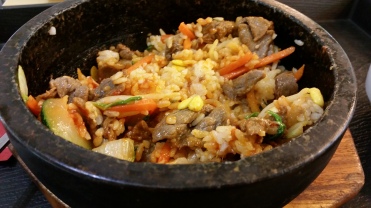 I Love Seoul Series: Best Things to Eat in Seoul | 1

I Love Seoul Series: Best Things to Eat in Seoul | 2