The Banpo Bridge Rainbow Fountain is a water show illuminated by hundreds of multi-colored lights on one of the worlds longest bridges. The water jets and multi-colored lights are coordinated to move along with music. The show is a good tourist attraction, and it usually only operates from April – October. 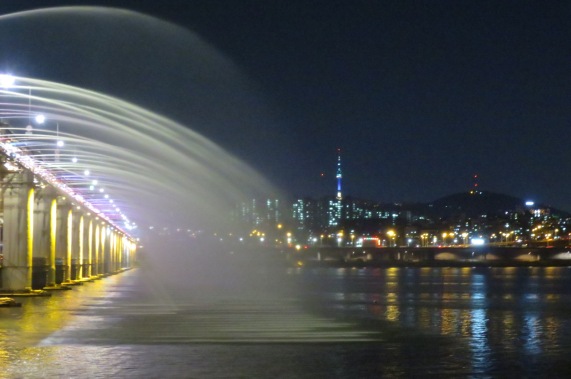 Luckily for me we went in October when the show was still operating! Once we got there though, it seemed like a never ending mission just to get to Banpo Bridge. We took the subway, but that ended up dropping us off on the other side of the huge park next to Han River. The walk there ended up being around 30 minutes or so. It was nice to walk around the park and see everything, but we were also on a time limit because the show was about to set off in 30 minutes. It was definitely cutting it close, and I just felt like I was rushing myself. If I had known about the long walk and the surrounding park ahead of time I would have chosen to go earlier to enjoy it. It would have felt more worth it to me if that was the case.

The show itself was nice, but one thing that disappointed me was that you couldn’t really see much of the color standing there in person. Maybe we were just too close or standing at a wrong angle? If you do go, try to see it from a higher, further, or angled distance and I think the color will stand out more. Overall I still had a nice time, and I think being able to experience the park afterwards & seeing the other beautiful buildings (like the one pictured below which constantly changed colors) made up for the some of the downfalls . If you decide to see the show while you’re in Seoul, make sure to give yourself enough time to enjoy the beautiful scenery & surroundings!

One thought on “I Love Seoul: Banpo Bridge Rainbow Fountain”