A sad and moving reminder of all the men who have, and are still, giving their all so that we may remain free.

My father served over 20 years in the Navy, and this visit became a very moving reminder of what he, and many others, have sacrificed along the way.

What really amazed me, and at the same time gave me chills, was that the ship’s oil was still flowing right into the beautiful waters of Pearl Harbor.  Since the 1940’s the ship has leaked 2-9 quarts of oil each day. 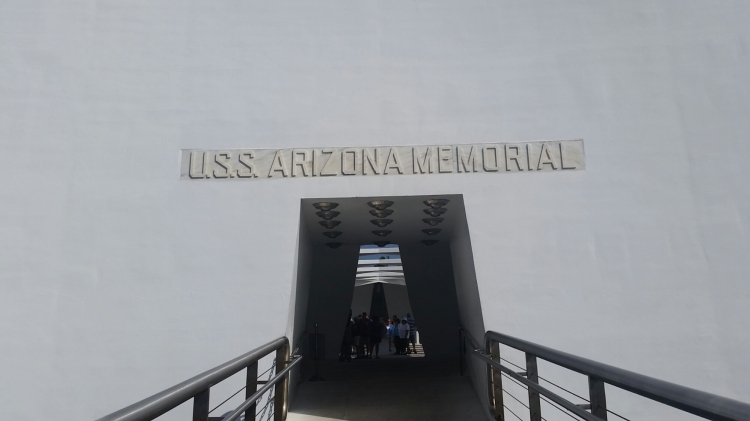 Including the U.S.S. Arizona, there are a total of 4 sites you can visit.  There is the U.S.S. Bowfin Submarine, Battleship Missouri Memorial, and the Pacific Aviation Museum of Pearl Harbor.  Besides coming to the U.S.S Arizona Memorial, I highly recommend visiting the Pacific Aviation Museum.  It is here that you get an in depth view into the personal lives, both civilian and servicemen, that were affected by the Pearl Harbor attacks and the sequence of events that were created afterwards.

There are always two sides to any story, and in the Pacific Aviation Museum I was able to learn of both the American and Japanese lives that were involved and greatly affected by it all.  It’s an experience that opened my eyes.

One story that had a resounding affect was that of 12 year old Sadaso Sasaki.  This little girl developed Lukemia after the atom bomb was dropped on her hometown of Hiroshima. Sadaso Sasaki folded between 1000-2000 cranes while she battled lukemia.  It’s and old Japanese tale; if a person folded a thousand cranes their wish would be granted.  Her wish was to be healed, but unfortunately she passed away in just a short time.  Her family had donated one of her paper cranes. in hopes of promoting peace.

Sadaso Sasaki ‘ s  tiny paper crane is displayed in just a small corner of the museum.  But it’s become a large reminder that no matter your nationality, ethnicity, gender, or age we are all human.  We all feel the same pain, sadness, and regret that come from our past.  But how we forgive, how we let go, and how we take that next step is what will enable to move towards a brighter peaceful day.