This method of transport will take around 1 ½ hours or more.  There is also an express train (costs more) & a bus that boards at Insadong.  I preferred this method since we already had our t-money cards, it was the cheapest route, and I preferred to be able to come and go at any time I wanted (unlike the bus which has 1 departure and return time)

One notable thing for anyone taking this method of transport to Nami Island; we had to get off at Maseok station as the train announced it was the last stop and everyone to get off.  I am not sure if this is has changed or they only do this certain times during the year, but just be on the lookout for this (this was as of October 2014).  When we asked the train director for Gapyeong he said there would be another train coming in just across the platform that would further take us to Gapyeong.  So don’t freak out, just ask for Gapyeong and they will point you in the right direction (for us we just needed to turn around, no further walking or getting to another platform).  From there we boarded and headed to Gapyeong.

Once you get off at Gapyeong station, head outside outside.  Once outside Gapyeong station, walk towards the street.  You will see a line of cabs waiting outside.  Tell them you want to go to Nami Island and they’ll take you straight there.  This is about a 5-10 minute drive.

They cab will drop you off at the end of the parking lot, and then you’ll have to walk through a sea of tour buses to get to the ticket booth.  Once you’re there at the ticket booth buy your ticket & enjoy the island!

You can either get to the island via ferry, or for the more adventurous, via zip line.  The zip line entrance will be on your left hand side of the parking lot (if heading towards Nami Island..  I definitely wanted to do this, but couldn’t risk losing my precious DSLR camera!  There were a couple of people zipping above us when we were on the ferry and it looked like so much fun! 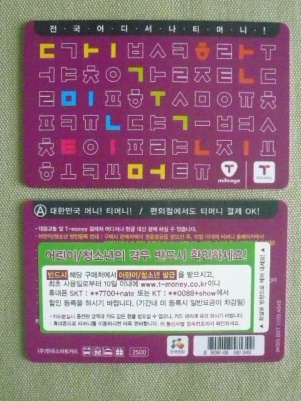 Korea really has a great subway system. This long trip out of Seoul may seem daunting at first, but it’s fairly easy once you look at the map and decide where to go.  Everything is color coded and it’s easy when they have each stop/station announced ahead of time.

Here are some helpful Links:

About the T-Money Card: http://asiaenglish.visitkorea.or.kr/ena/TR/TR_EN_5_4.jsp

3 thoughts on “How to get to Nami Island from Myeongdong”