As they saying goes, good things must come to an end. The final day on Santorini was stunning, crowded, and memorable.

Day three, the final day on Santorini! Although three days may seem short to some, this was the perfect introduction to Greece, and a great send off to my next adventure on Milos!

I think it’s safe to say that I achieved my goal of completely relaxing and doing almost nothing on Santorini. Besides hiking on day two, I still didn’t plan on doing much for day three. You’re sick of me saying by now, but I’ll say it again. Santorini can be an expensive island. But if you do your research, and be careful where you splurge, you can leave with a decent amount of money left in your pocket.

Speaking of splurging, one thing I love to do on vacation is bring back gifts to my family. In the Filipino culture this is called a pasalubong. I usually reserve the last day for shopping and purchasing gifts. I recommend walking around to get a good idea of what type of gifts are available and at what prices. You can then head back to the stores that had the best deals or gifts. As for me, I’ve found that I love to give. and people love to receive. food or snacks as gifts. Food can tell you a lot about a country’s culture, and I personally love receiving foods from around the world to try out.

Later on I’ll be making a separate post about some of the specialties of each Greek island I’ve visited. So be on the look out for that! For now though, on to day three in Santorini. 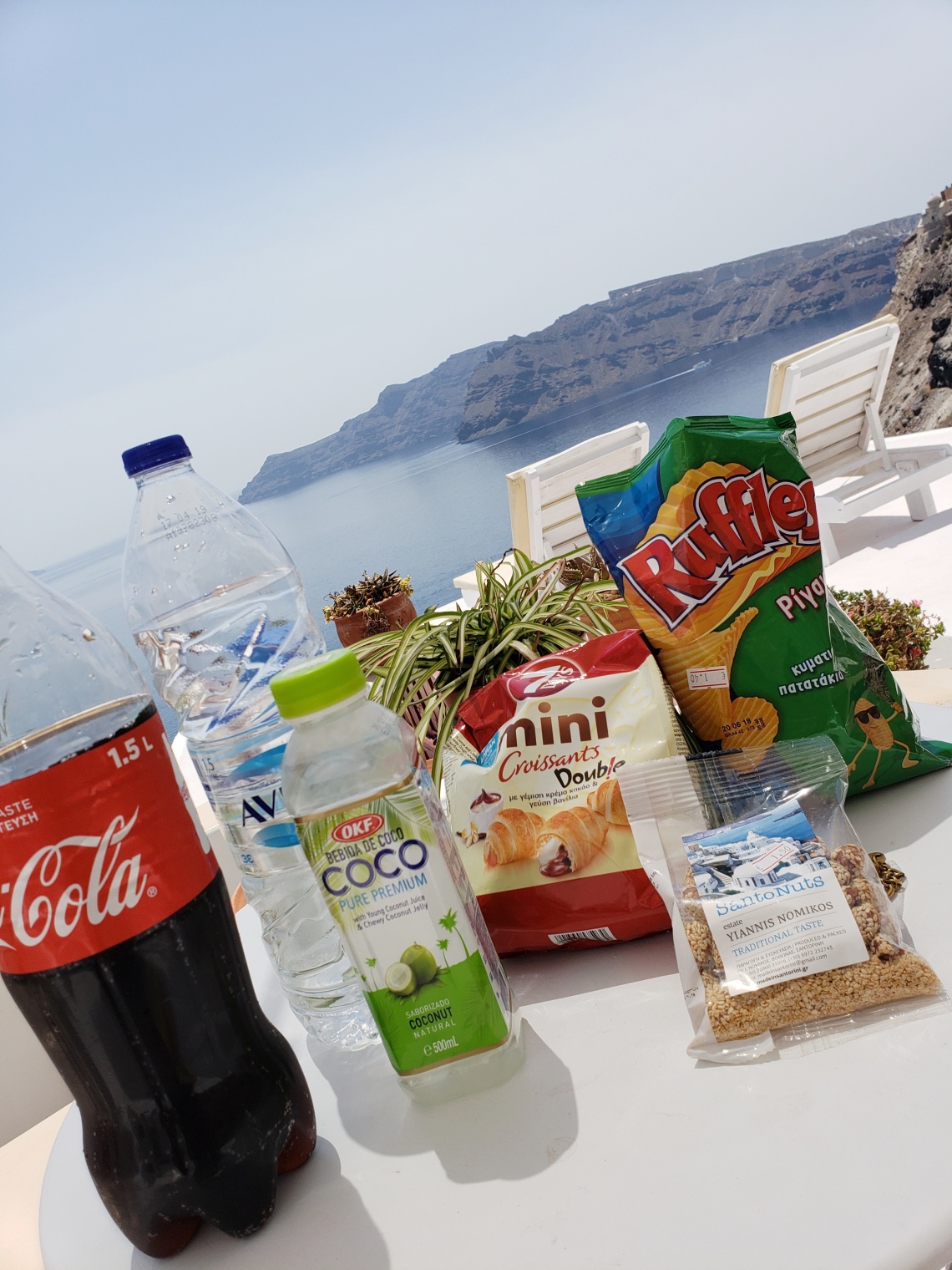 The morning of day three was all about souvenir shopping before the cruise crowds descended on Oia. Besides food, I also purchased some small beautiful handmade pottery. I only ran into one store that did not take credit cards, but that wasn’t much of a problem. Earlier I had exchanged money at the Athens airport, and that ended up being my saving grace! Long story short, the ATMs in the main square of Oia were not working and/or had run out of cash. I was frantic after it prompted me through the last screen, but then did not spit out any cash. I am lucky to bank with a credit union, so a quick phone call and it was all taken care of. The guy who tried it prior to me (and who just watched me do it instead of warning me!) had a far more difficult time with his bank. So one tip I can give is to make sure to get cash beforehand; at the airport or main town of Fira.

The one “splurge” I did need cash for was a massage. Going with the “relaxation” theme, I decided to book a 60 minute massage through my Airbnb host. It cost about $85 Euro for a sixty minute massage, but it was so well worth it to me. Oddly enough, vacations seem to be the only time I even think about getting a massage. So if you happen to have time, it’s a great way to relax on this luxurious island.

One of the last things I did on Santorini was to go and see that world famous sunset. Santorini’s sunsets get quite crowded, so try to get there 30 minutes early for a decent spot. Some people wait and stake out their spot for an hour or more, but it just didn’t seem to be worth it at that point. Final verdict in that world famous sunset? It was all about the setting of being on Santorini rather than the sunset itself. But what can I say? I’m spoiled by beautiful California sunsets! That day the sun set with a husky orange glow over the whitewashed houses hanging off Santorini’s cliffs. But I’m going to be honest here. It wasn’t one of the best sunsets I’ve seen. But I say it’s still worth going at least once.

Well that’s it for my short stay on Santorini. I can’t believe something I’ve been dreaming about this for over 15 years, and it actually came true. Santorini was definitely a check off the bucket list for me! See you in the next post!

Sun, sand and sea .....tales from the life of a British expat in the UAE.